Ellison and Mack are alleged to have kidnapped 6ix9ine last summer. The two were indicted on multiple gang-related charges this past June.

Dressed in a blue prison suit, Hernandez began to tell the story of how he was recruited into the Nine Trey Gangsta Bloods, as he was being questing by attorney Michael Longyear.

However, during his testimony, Hernandez threw a stray at Ohio rapper Trippie Redd, naming him as once apart of a rival gang, according to Matthew Russell Lee, who is live-tweeting from the courtroom at Manhattan’s Thurgood Marshall United States Courthouse.

6ix9ine was arrested back in November 2018 on federal drug racketeering charges. He made the decision to flip “the day after we was taken down.”

It was when “Gummo” was played in the courtroom where prosecutors questioned the firearms in the visual, where 6ix9ine named Trippie Redd as a former gang member. “Gummo” was reportedly a diss track towards the Ohio native.

“Me and Trippie Redd were signed to the same label,” Hernandez explained. “There was a lot of jealousy involved.”

Following the “Gummo” video shoot is when he met Kifano “Shotti” Jordan, along with other Nine Trey members, who he named while the video played in the court room. “Shotti” was sentenced to 15 years in prison, on Sept. 6, 2019.

Hernandez then began to talk about the creation of “Kooda,” a record that included all gang-related terms, stemming from the Nine Trey Bloods and the creation of the slogan, “Treyway.”

“Treyway was more of a sophisticated way to name the gang—something that we could market,” said Hernandez.

After the success of “Kooda,” 6ix9ine was officially apart of the Nine Trey Bloods.

6ix9ine continued to talk about the Nine Trey Bloods from the handshake, down to the  “prison lineup” (Nine Trey members behind bars) and “street lineup” (members who are not incarcerated).

He will continue his testimony on Wednesday, Sept. 18, 2019, where he will go into details of his alleged kidnapping that took place July 2018. 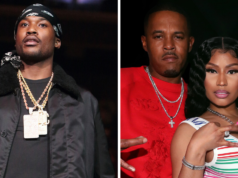